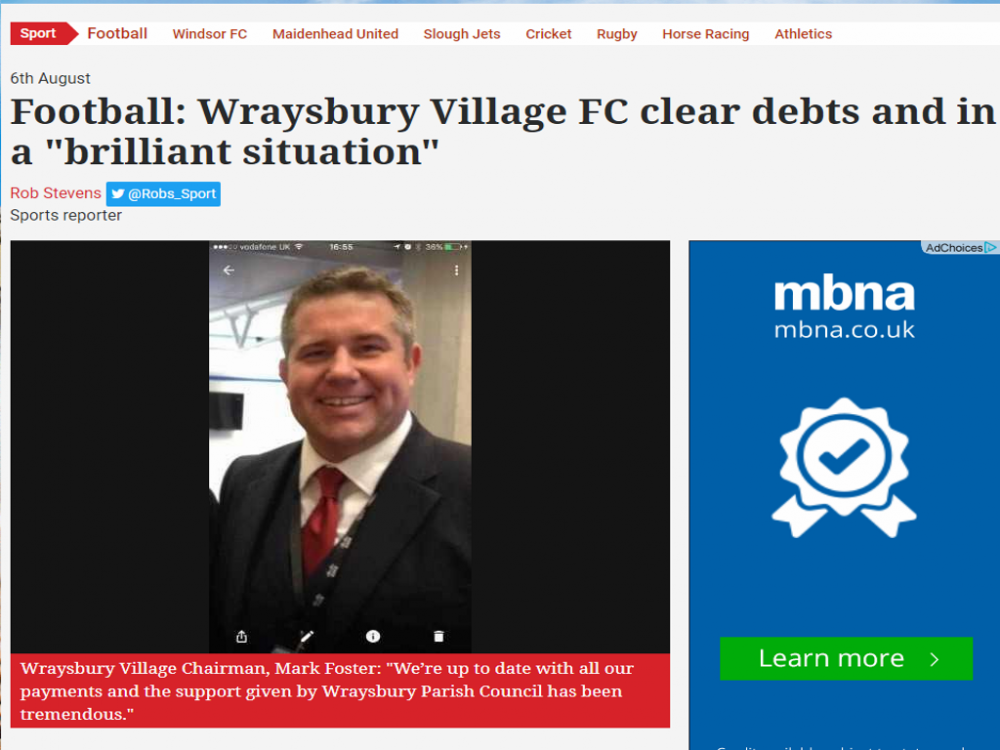 Wraysbury Village FC clear debts and in a “brilliant situation”

NEW WRAYSBURY Village Chairman Mark Foster has declared the football club is in a “brilliant situation” ahead of the new Thames Valley Premier Division season.

The club was fighting for its future at the Memorial Ground when Foster stepped in with a new committee to clear the debt owed.

Foster insists Wraysbury are now up to date with all their payments and, after thanking the Parish Council for their support to the new set-up, is looking ahead to the new season with excitement.

He told the Observer: “We have a good, cheap land rate with the council but in reality the club had not previously paid its bills.

“It was a poorly managed situation but the new committee and I wanted the club to be a part of the village again and we’ve moved on massively.

“We’re now in a brilliant situation, it’s fantastic. We’re up to date with all our payments and the support given by Wraysbury Parish Council has been tremendous. They only ask that the club is run properly.

“The club has now cleared the debt that was owed, and the council has helped us gain grants and support to move forward. We had a massive fundraiser in the village where £7,000 was raised to help clear the debt.

“We’re already starting to use the money raised to upgrade the club. For example, our line marker was 20-years-old and did not work properly, we have a new kit and implemented a new subscription process with the players to make it more sustainable.

“We’ve booked safeguarding and and first response courses with the aim of running a youth team in October and a view to get them into the league for the following season.

“We have 14 people in the committee, all with different skills sets and working hard. We feel a part of the village family again.”

Wraysbury beat Reading YMCA 7-3 in a recent pre-season friendly but Foster will not put pressure on the team in what he believes will be a transitional season.

He said: “We’re over the moon with the win over Reading YMCA. I know it was only a friendly but it was great to get something out of the game and I’m quite excited by the upcoming season.

“Lee Dewhurst (manager) has brought in really good players and we’re looking for an improvement on last year. If anything new young players have come across, some have signed from higher leagues.”